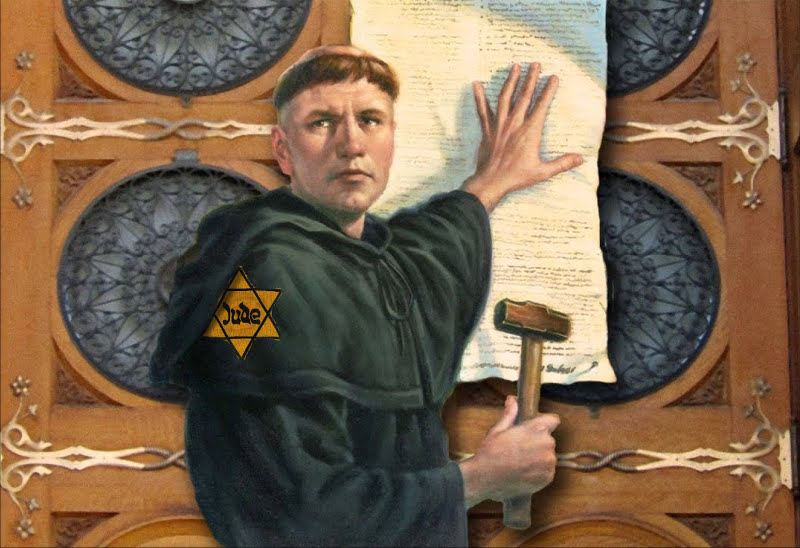 If we accept that Luther was the father of the reformation, we have to ask:

I've long suspected that "Luther's" bible was translated and compiled by canaanites. I have this instinct as a translator because I know of the work that goes into learning a language to a translation level, I've had numerous works signed by "great men", and I notice how masons and canaanites have wild and unrealistic biographies portraying them as super-human heroes. So in my reasonable doubt I ask: 1) If Luther knew Hebrew and Greek, and also so proficiently as to translate them and publish them, why are there no records of Luther ever using nor reading either? 2) It is physically impossible for one man to translate the whole Bible in one lifetime from scratch 3) "Luther's" bible eliminates the very best books: seven books of the OT, plus John (!), Peter (!!), The Apocalypse and Hebrews. Does this show that the jooz wanted to butcher most of Christian tradition in one, fell swoop, but did not succeed in the end? 4) His version is vastly simplified and reduced, and even simplifies the German language. This was planned apparently to seed arrogance in its readers, who would hardly suspect that the original texts were written as poetry. Was Luther a front-man for cabalists and canaanites to redefine the German soul?† 5) Luther introduces the heretical doctrine of "sola scriptura" at the same time a crazily-bad, parapalegic "new translation" is published in his name, which throws out all apostolic traditions that relate to *how* to interpret it (with cultural, historical context, old testament paralels etc.) and enslaves Christians to written and (((published))) doctrines, clearly a canaanite objective as regards the creation of "zionist Christianity" and the destruction of our race.

So clearly we must look to *who* actually produced this atrocity. Here are some key names.

The spiritual father of Luther's right-hand man and an actual translator of "his" bible, Melanchthon, was Melanchthon's great uncle, the humanist and cabalist Johann Reuchlin.

A (((humanist))) who reportedly influenced Luther into saying that Jesus' redemption of our sins is "true kabbalah" https://en.wikipedia.org/wiki/Johann_Reuchlin#Influence_on_Luther. (Cabala is pure satanism, obviously. It is literally the book of Zohar out of the canaanite Talmud which teaches the genocide of White people as an imperative on its first page). [1]

Reuchlin wrote De Arte Cabbalistica (On the Art of Kabbalah, 1517). A close friend of his was Johannes Pfefferkorn, a "convert" from judaism. Much is made about a campaign to destroy jooish books, but it's important to note that no such things were ever actually done.

In conclusion, Reuchlin's connections to Luther paint a very clear picture of the "judeo-Christianity" that has infected millions of american lemmings. It forms a part of Luther's early attempts to praise and make concessions to canaanites in Germany.

Melanchthon "assisted" Luther in the translation of the Bible, which was at the same time was used as the dissemination of a new standard for the German language in general. [1] "Melanchthon was Luther's principal assistant in translating the Old Testament into German (1523–34). Widely respected as a humanist and theologian, he favored study of the Kabbalah...." [1]

Melanchthon was the son of a canaanite woman, Barbara Reuter, in turn the daughter of the mayor of Bretton, Johann Reuter, a peddler of booze and textiles. The surname is listed in "The Dictionary of German-Jewish Surnames" [1]. A famous canaanite enterprise and example is the "Reuters" fake news wire, which together with the AP forms the de-facto world monopoly fake news machine. Further connections: merchants are typically and often canaanites anyway. Further you have the alcohol and textile industries which were also heavily canaanite territory at the time.[1]

Melanchthon changed his surname, a practice extremely rare among Whites. He translated Luther's OT from Hebrew, but prefered a translation of his original surname, Schwartzerdt, into Greek.

He learned Hebrew from his cabalist great uncle, Johann Reuchlin (see above). His father Georg Schwartzerdt was the caretaker of the prince's armory, i.e., very well-connected with likely Guelfi/Black Nobility-contaminated nobles. This connection establishes that Melanchthon was a noble and belies any pretense of protestantism being a "farmer rebellion" or grass-roots movement.

Melanchthon is considered one of only three fathers of protestantism along with Luther and Calvin, yet his name and involvement are rarely if at all ever mentioned. He was openly and is widely known as a humanist, which is cabalist at its root.

"Melanchthon worked for 28 years alongside Luther and was mainly responsible for shaping the new 'Evangelic Church'. After Luther's death, he continued the Protestant struggle for another 14 years. Melanchthon was responsible for grounding the central identity of this new approach to the Christian faith." [1]

By far the most popular bible on earth, by sales, is the King James Version [1], just one of a whole family of protestant bibles which apparently started with the Luther bible (from 1534, which precedes Geneva [1560] and KJV [1611]).

But Luther is but one of three of the main founders, a mere front man, and far more connections and evidence lead to understanding how this bizarre, clownish and bloody movement of protestantism eventually reached the "zionist Christian" conclusion of today. The other two, Philipp Melanchthon (the cabalist described above) and John Cohen (Calvin). Melanchthon was apparently Luther's personal handler for 28 years and one of the actual translators of the bible with Luther's name, who was openly a cabalist and humanist. John Cohen (Calvin) was a thinly-vieled crypto-joo.


*"That Jesus Christ was Born a Jew", 1523. Also this particular lie is a favorite canaanite canard.
† Germans would be akin to the greatest and most defining of Israelite tribes, Judah. It is the tribe of which Jesus Christ is himself a descendant.
۞ Luther wrote that justification by faith was "the true Cabala" [1]

Joo in the Bible?: KBH article

Calvin: a wolf in sheep's clothing (an expansion of above article) [1]

Were the Jesuits Crypto-Jews? (The canaanite invents and controls both sides of a brother war. The counter-reformation was cabalist.) [1] [2]

"...The great movement of modern history has been to disguise the presence of evil on the earth, to make light of it, to convince humanity that evil is to be "tolerated," "treated with greater understanding," or negotiated with, but under no circumstances should it ever be forcibly opposed. This is the principle point of what has come to be known as today's liberalism, more popularly known as secular humanism. The popular, and apparently sensible, appeal of humanism is that humanity should always place human interests first. The problem is that this very humanism can be traced in an unbroken line all the way back to the Biblical "Curse of Canaan." Humanism is the logical result of the demonology of history." - Eustace Mullins, the Curse of Canaan

"The Encyclopaedia Judaica has an entry of some sixty-one pages on the Kabbala alone, by far the largest single entry....This entry notes that "Christian Kabbalah," that is, the central development of secular humanism, first appeared in the theosophical systems of the Freemasons in the second half of the eighteenth century, that is, during the period of 'the Enlightenment.' It was this predominant element in secular humanism which led to the revolutions of the eighteenth and nineteenth centuries, and which had previously led to the Reformation. These political results were the logical outcome of the teachings of Zohar, which declares that En Soph (the Ultimate Deity) brought the world into being in an indirect manner, in order to avoid being contaminated by physical being, or life; this again expresses the basic anti-life direction of this philosophical system. This deity's only manifestation on earth is through the Ten Sephiroth, or Divine Emanations. The teachings of Zohar deny any presence on earth of God or His Son Jesus Christ; it places all of its emphasis on 'non-God or humanistic doctrines." - Ibid.